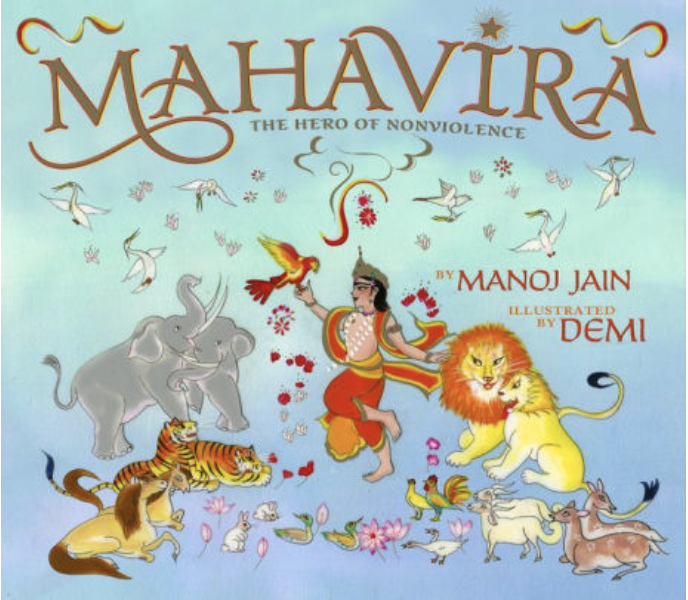 "Mahavira: The Hero of Nonviolence by Manoj Jain and Demi"

Imagine a world where no one gets hurt, a world where no one is teased or bullied, a world where there is no fear or anger. Six centuries before the birth of Jesus, in the faraway land of India, there lived a great spiritual teacher name Mahavira (which means Ãvery braveÃ), who imagined just such a world. He showed kindness to every living being and emphasized the practice of nonviolence, compassion, and forgiveness. The religion of Mahavira was called Jainism.

Mahavira was born a prince, but because he had such deep love and respect for all living creatures, he renounced his wealth and power to become a wandering monk. The Jain teachings of Mahavira became very popular. He taught three important lessons: that one should have love and compassion for all living things; that one should not be too prideful of oneÃs own point of view because the truth has many sides; and that one should not be greedy and should avoid attachment to possessions.
Today Jainism has more than 10 million adherents throughout the world. In following the example of Mahavira, Jains practice a vegetarian diet and are committed to sound ecological and environmental practices. MahaviraÃs lessons on nonviolence and compassion still have a profound impact around the globe, and he is credited with influencing Mahatma Gandhi, who in turn inspired Martin Luther King, Jr.

Beautifully brought to life by the delicate paintings of Demi and the powerful yet simple narrative of nationally recognized writer, Manoj Jain, the story of MahaviraÃs life will provide a shining example of how one spiritual teacherÃs noble ideals can echo throughout the ages.