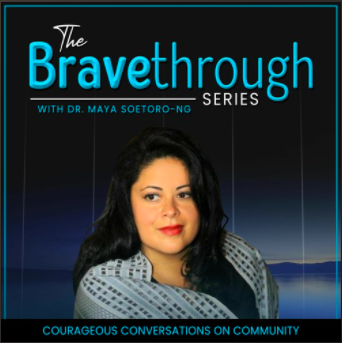 Dr. Maya Soetoro-Ng is a peace educator and professor at the University of Hawaii at Manoa. She is also the co-founder of three nonprofits: Ceeds of Peace, The Institute for Climate and Peace, and Peace Studio. The Bravethrough Series brings Maya to the table with changemakers and influencers from the front lines of our communities. Listen to learn new strategies, revisit out assumptions, and challenge ourselves to take action in brave new ways.

Liam Chinn was raised in a Native American community in Alaska, where his lived experience has inspired his career path. For the past 20 years, he has worked locally and in more than a dozen countries developing initiatives that advance self-determination and healing in communities fractured by violence and oppression. Liam is currently a community safety and police reform consultant. He was appointed by the City of Oakland in 2020 to serve as Co-Chair of the Alternate Responses and Investments Advisory Board, part of the Cityâs Reimagining Public Safety Task Force. Prior to this, he served as the founding Executive Director of Restore Oakland, a restorative justice and job training center that is a model for reinvestment and healing in low-income communities of color devastated by mass incarceration. For nearly a decade, he also served with The Asia Foundation, where he led a groundbreaking pilot program in the war-torn country of Timor-Leste that won shifts in policies away from militarized policing, and toward a nationwide community-led restorative justice system.